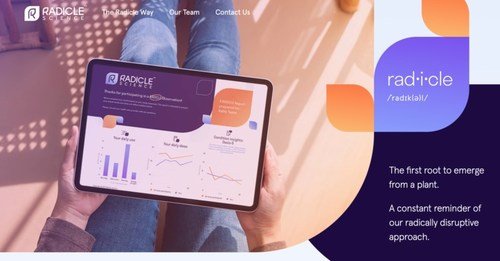 Radicle Science and Open Book Extracts release results of the largest ever blinded, randomized clinical trial on cannabinoids and pain—and the first study of its kind to examine the impact of rare cannabinoids

SAN DIEGO, June 15, 2022 /PRNewswire/ — Radicle Science, an AI-driven healthtech B-corp pioneering large scale clinical trials on health and wellness products, today announced the results of history’s largest cannabinoid clinical trial on pain, in partnership with Open Book Extracts (OBX). All formulations in the pain study on Cannabidiol (CBD) and Rare Cannabinoids were supplied by OBX, a NSF-certified manufacturer and distributor of the industry’s most innovative and highest quality cannabinoid ingredients and finished products.

The OBX Pain Study on CBD and Rare Cannabinoids is the largest ever randomized, controlled clinical trial of cannabinoids for pain, involving more than 1600 participants from across the U.S. and the first of its kind to examine the synergistic impact of rare cannabinoids like Cannabichromene (CBC) and Cannabigerol (CBG) on pain.

CLINICAL TRIAL METHODOLOGY
The OBX Pain Study on CBD and Rare Cannabinoids was a blinded, randomized, controlled clinical trial to evaluate the effects of various cannabinoid formulations on pain, as well as other health outcomes. The trial was specifically designed to examine if adding other ingredients to a formulation (“enhanced products”) in conjunction with CBD could lead to better outcomes than with CBD alone. The trial included 6 product arms, which all contained CBD at 40 mg per serving. Most arms also contained varying levels of rare cannabinoids, including CBG and CBC.

A diverse sample of 1629 pain-sufferers from across the U.S. were randomized to receive and take one of these product formulations for a month while reporting their pain relative to specific benchmarks that included severity, general activity, sleep quality, anxiety symptoms and overall quality of life.

SIGNIFICANT RESEARCH FINDINGS
All of the enhanced product formulations included in this clinical trial led to statistically significant improvements in pain, anxiety, sleep quality and overall quality of life.

Overall, the different enhanced formulations performed roughly the same for the improvement of pain, anxiety, sleep quality and quality of life. However, for people with moderate pain, there was evidence that the addition of 20mg CBC to a formulation containing 40mg of CBD could significantly improve its pain-relieving effects—particularly when this enhanced product was taken for 2 or more weeks.

All products tested were deemed safe to consume. Only about 1 in 10 participants reported side effects, and none were severe.

KEY TAKEAWAY: CLINICALLY MEANINGFUL IMPROVEMENTS
All the formulations in this trial led to statistically significant and clinically meaningful improvements in pain after just 4 weeks—all with minimal side effects.

“We at OBX are fundamentally dedicated to supporting all consumers in their endeavor to feel their best from the inside out through a holistic universe of effective, evidence-based cannabinoid products of the highest quality,” said OBX CEO Dave Neundorfer. “While existing studies suggest that cannabidiol and rare cannabinoids, including CBG and CBC, have considerable potential to support wellness, there has been a glaring gap in scientifically valid research dedicated to guiding effective product development. That’s why we collaborated with the renowned medical experts and data scientists at Radicle Science to better understand the potential of rare cannabinoids as an ingredient and, in particular, their ability to support better quality of life outcomes relating to pain.”

“It’s a privilege to make history with OBX,” said Dr. Jeff Chen, MD, Radicle Science’s CEO and UCLA Cannabis Research Initiative’s founder and former Executive Director. “Rare cannabinoids are present in a variety of health and wellness products containing cannabis and hemp, but there has been virtually no clinical data on their effectiveness for any medical condition, including pain. Radicle Science assessed for the first time in history the potential synergistic effects of certain rare cannabinoids on pain and demonstrated that these natural products can make a measurable positive impact.”

The OBX Pain Study on CBD and Rare Cannabinoids is OBX’s first completed clinical trial with Radicle Science. Radicle Science and OBX will continue their partnership with similar large-scale, blinded, randomized, -controlled clinical trials on rare cannabinoids, including THCV, CBN, CBG and CBC, which OBX will supply. Radicle will be studying their effects on other health and lifestyle benchmarks, such as energy, focus, appetite, sleep disturbance, stress and anxiety, across thousands of study participants.

Pelin Thorogood, Radicle Science Co-founder and Executive Chair added, “It was promising to see that the addition of a rare cannabinoid could augment the effects of CBD. We will be further exploring the entourage effect with an upcoming study, Radicle Spectrum, which will be the first head-to-head study comparing full or broad spectrum CBD to isolate and placebo. It is our hope this study will provide data to help the FDA ascertain whether CBD isolate is a drug.”

About Radicle Science
Radicle Science is an AI-driven healthtech B-corp offering the first ever scalable path to validate and predict the effects of health and wellness products, transforming them into democratized precision solutions for ailments or enhancement of human function. Radicle Science leverages a proprietary data analytics platform and a virtual, direct-to-consumer (D2C) healthtech clinical trial model to deliver objective health outcome data across diverse populations and conditions—all at a fraction of the cost and time of traditional methods. The company’s Radicle Vision is a future where affordable and accessible health and wellness products are trusted by patients, recommended by healthcare providers, reimbursed by insurance and used as widely as pharmaceutical drugs. To learn more about Radicle Science, visit www.RadicleScience.com.

About Open Book Extracts
Headquartered in Roxboro, NC, Open Book Extracts is a cGMP-certified manufacturer of premium plant-based cannabinoid products, aiming to be the industry’s true north by delivering premium products, exceptional service and industry-leading transparency. With control of the entire supply chain, a state-of-the-art extraction campus near North Carolina’s Research Triangle, proprietary refinement and conversion methods backed by a growing IP portfolio and a team of PhD chemists and seasoned business leaders, OBX is the trusted partner for global brands seeking to enter the marketplace. Learn more at www.OpenBookExtracts.com.